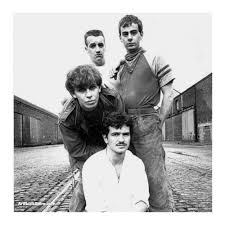 Version one - BBC Session for John Peel, recorded 2nd October 1979, available on "Peel Sessions Plus", "Zoology" and "Kilimanjaro" deluxe edition
Julian Cope - bass, vocals
Ged Quinn - organ
Mick Finkler - guitar
Gary Dwyer - drums
Version two - "Kilimanjaro" album (original issue and second "Zebra cover" issue), recorded Spring 1980, released October 1980
Julian Cope -.vocals, bass
David Balfe - organ, synthesiser
Mick Finkler - guitar
Gary Dwyer - drums
Hurricane Smith, Ray Martinez - Trumpets
Written by Cope / Dwyer / Finkler
"Brave boys keep their promises" made a small but significant journey from the time it arrived in the Teardrop Explodes' live set as early as February 1979. Only back then it was called "Jury Service" and had totally different lyrics and vocal melodies. Indeed it's hard to discern any vocal melody at all in the one recording of "Jury Service" - Cope seems to be speak singing about sitting on jury service, and it lasting another day, and another day... It's a typical very early Teardrop song at this point, Simpson holds down one note on the organ as an introduction, Finkler plays the distinctive single guitar line, Cope's bass is octave jumping like disco again, and there's the instrumental breaks where a normal chorus would be - in this version the links back to "Camera Camera" are more obvious.
By the summer of 1979 the song as we know it was taking shape. As recorded at the Leigh Festival in August 1979, the droning organ introduction is still there from "Jury Service" but the organ line is now slightly more complex. The song has changed title and gained a new fuller lyric and vocal melody and the arrangement has filled out too, there's an extra instrumental verse after the second chorus, leading into a bridge which will also be repeated at the end of the song followed by a five chord outro and a sudden stop.
And yet it's still not quite right, and the Peel session version from October 79 is closer still. The phased and reverb heavy organ drone fading in is now in place, the organ line is now a standard organ tone instead of a repeated note, which sounds better. It's 99% there.
All it will take is a little sweetening up at Rockfield Studios in 1980 to perfect it. The swirling introduction is more phased and maintains a drone throughout the verses, the musicianship is tighter, the organ line is more melodic yet slightly off centre in the instrumental chorus, Cope's vocals are double tracked for more power and he's conversational and audibly smiling in places, he adds some sweet vocalising here and there - those choirboy "Brave boy-ooys" harmonies, little asides here and there, especially in the third verse. Even the trumpets turn up twice, for a brief and triumphant blast at the end of the bridge out of the instrumental sections. It's a well arranged little song, always some new little earworm to grab hold of, and yet to me it's still a bit of a filler on "Kilimanjaro". Sure the sudden ending leads nicely into "Bouncing babies", and the reference to fighting in the lyrics ties in with other warfare imagery in the catalogue, and it's sweet without being sickening ... I like it, I enjoy it within the context of the album, but it's not the first song I'd listen to if I had to pull up a Teardrops song. Maybe it's a fan favourite, but it's a pleasant way to pass a few minutes on side two of the debut album. Feel free to shout at me and persuade me of its genius within the comments section.
For all my moaning, I still do like the song. And there's always a surprise somewhere around the corner. A quick trawl through the internet (or Twitter at least) finds a rare piece of footage of the band performing it at Hurrahs in New York in the summer of 1980. A picture from this show can be found on the reverse of the original sleeve of "Kilimanjaro" (and the inner sleeve too) but having moving images and sound makes it more appealing. Love the New York crowd digging the band's groove. Also while digging it turns out the entire Hurrahs gig was recorded on film and is available at HistoricFilms.com - which may sound like a fly-by-night concern but actually has an archive of a host of famous and important TV shows like the Ed Sullivan Show and Soul Train. And, it seems, an hour long set of 1980 prime Teardrop Explodes. It also lists a song from the set as "Kwalo Klobinsky's Headache" which they play in the main set and as an encore. I'm sure this is just Cope making fun. (The Kwalo Klobinsky conundrum will be dealt with later in the blog). Going back to the "Brave Boys" clip it is apparently available on a DVD "Live From Hurrah's" issued in 2006 which features 30 live performances from 1980 at the legendary venue. It's on Discogs or Amazon for under a tenner. Might be worth an investment... Anyway, having played the song in just about every live set from early 1979 onwards, "Brave boys..." was dropped from the setlist after the 1980 Daktari tour and never played again. It served its purpose and there were more interesting songs arriving into the live set by the start of 1981. But let's not get ahead of ourselves...
I should thank a few people while I'm here for their help along the way - the Twitter account @TExplodes have been hugely supportive of this blog and have highlighted links I've never seen before (such as the Hurrahs clip). Also Tony Mack on YouTube is publishing a huge amount of fascinating Teardrops material from throughout their career which has been immensely useful for this blog. You are both heroes and I am eternally grateful. Follow / subscribe them as applicable.

Popular posts from this blog 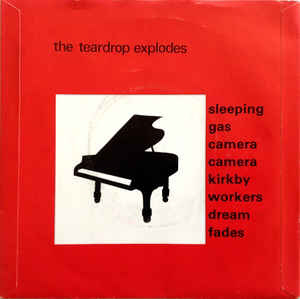 Exploding The Teardrops - an introduction

October 09, 2021
I fell in love with the Teardrop Explodes in May 1985 when I bought their "You disappear from view" double seven inch single for 50p from my local Oxfam store. I was aware of their hit singles from 1981 and knew Julian Cope was a bit of an acid casualty from the interviews and record reviews in Melody Maker in 1984 associated with his "World shut your mouth" and "Fried" albums, and I'd already bought the "Sunspots" double 7 inch by then, but I didn't know what to expect from the Teardrop Explodes. It turned out I vaguely remembered "You disappear from view" from the Spring of 1983 when it was released, but the collected b sides were something else - the tense "Suffocate", moody "Ouch Monkeys" and "Soft enough for you" and the frantic electropop of "The in-cyclopedia". I wanted more, and within days I'd bought their debut album "Kilimanjaro" and it sounded like a totally diffe
Read more 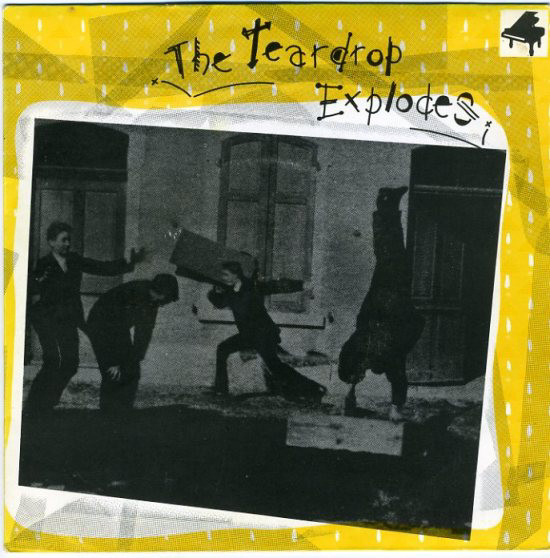 Version One - Zoo Records CAGE 005 - recorded 14th May 1979 released June 1979 Julian Cope - vocals, bass, organ Mick Finkler - guitar Gary Dwyer - drums Version Two - "Kilimanjaro" album, recorded Spring 1980, released October 1980 Julian Cope - vocals, bass David Balfe - organ Mick Finkler - guitar Gary Dwyer - drums Written by Finkler / Dwyer / Cope / Simpson The Teardrop Explodes had made a splash in the indie world with their debut single "Sleeping Gas" in February, and alongside the debut single by Echo and the Bunnymen (released in May 79, also on Zoo Records) it was clear there was a scene developing around the two bands in Liverpool. Of course both Bill Drummond and Dave Balfe wanted to encourage this as both bands were on their label and managed by the pair and oh yeah they were the producers too. Echo and Teardrop weren't the only bands in Liverpool but the first to move from stage to vinyl. They would soon be touring together around the
Read more